“What in the name of Zeus and all his minions are you eating now?”

“Eanun utta uffn” The unintelligible sounds were the product of a tongue temporarily jammed to the roof of a mouth. A few seconds later there was a noise like a large plunger being forcibly pulled from a drain and some concentrated chewing.

“A peanut butter muffin, I’ve been experimenting” The face contorted with the effort of a tongue not quite long or fine enough trying to remove the last vestiges of muffin from between the teeth.

“Diet going well then!?” Although stated clearly, the speaker tried to cover his words with the shuffling of paper; this was a touchy subject.

“I am glorious in my perfection” He rose to his full height and gathered his flowing robes around his ample frame.

“Only since I let the robes out…….mutter…….podgy…..mutter”

“Hmmph, you’re one to talk, I notice we’re short on chocolate hobnobs again and I haven’t been eating them..hang on a minute have you seen this audit report?” 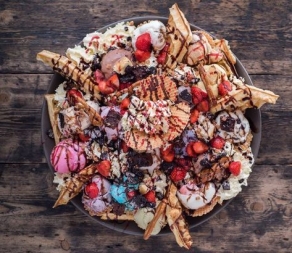 “I am not giving up my morning hobnob just because you’ve decided to take up baking! Anyway, have you seen the creatures in the factory these days? Half of them have their bellies hanging somewhere around their knees and your Roman Empire dessert is a least partway responsible you know…….what audit report?”

“Ahhh those were the days” said with fond reminiscence “All those sins at one time; I love it when we’re busy don’t you?”

“Talk about rose coloured glasses! What bloody audit report?” There were definite notes of impatience in his tone

“This one. The latest furry creatures audit” Unfortunately waving a piece of paper within 2 centimetres of someone’s nose does little to aid their ability to actually read it.

This could have degenerated into a hair pulling, air slapping kind of argument had the numbers on the offending piece of paper come into clear focus.

“Yes, precisely. What has been going on down there? Who’s in charge of the furry ones because whoever it is they’ve got some explaining to do!” There was no doubt that there would be little time for explaining in between all the noisy berating.

“It’s old Bob but you pulled him off the furry ones so he could help out with the fishy ones after the creatures decided that the water we provided was no good unless it was encased in plastic, remember?”

“Bugger! Yes, I remember now. Get him up here and tell him it’s an emergency, there’s hardly any of the stripey ones left and they’re my favourites, I loved that design”

“Boss, what are you doing exactly, that’s my new bum design, I’m calling it the Brazen Buttock” He’d been keeping up with fashion, unlike his boss, and knew that, when it came to bums, bigger was definitely better.

“I’m painting a few” He did indeed have a paintbrush in hand and was drawing an outline, the tip of his tongue poking between his teeth as he concentrated on keeping his hand steady.

“Why and why only a few? I thought we could put that design into full production next week” This said with the kind of disgruntled irritation of an employee who feels that his talents are rarely fully recognised.

“10,000? That’s nothing! I might as well not have bothered!” He could barely stop a tear from falling

“Oh don’t sulk, these buttocks will be very, very special but just not for everyone that’s all” He was not actually an unkind boss and this was said with an encouraging smile. “I’m only going to use them for the creatures that think killing the furry ones is some sort of entertainment or a way to make that honey they all seem so keen on”

“Yep that’s the kiddie. There I’ve finished, what do you think?” He held the buttocks before him proudly. Painted on them were 3 red rings with a red circle in the middle.

Ok, I get it, it’s a target but won’t they just be able to put trousers on or something?” To him it seemed like a pretty large flaw in an otherwise crazy plan.

“Not with the paint I’ve used.” Said with a sly grin “Do you remember when we decided we needed something to jazz up the firmament?”

“Sure, we bought in all that glow in the dark stuff……oh I get it now….ooohhh sneaky, I like it” He grinned broadly and remembered why this was the bloke in charge.

“Excellent! Now run down and find Old Bob and I’ll start fixing on some of these buttocks. I’ll teach those creatures to stop knocking off the furry ones if it’s the last thing I do” With grim determination he fixed his stare on a group of poachers; they didn’t know it but their lives (and their buttocks) were about to change forever.

This was written in response to an announcement from the charity Born Free that the tiger is at risk of extinction, thanks to mankind. The poachers who hunt them and the developers who destroy their habitat are on the road to ensuring that our grandchildren or great grandchildren may talk about tigers in the same way we talk about dodo’s. Therefore, I am using this post to try and do what little I can to help spread the word before these beautiful animals are lost to us forever….