HAPPY NEW YEAR! How have you all been? I hope that Christmas was all that you hoped it would be and that you’ve had a great start to 2019! As for me, I arrived back home last night after an 8 hour drive and, what turned out to be, a very enjoyable break in Rome. There was the odd emotional moment but I let them come… and they did…and then they went but there were also some very happy moments, some of which I thought I’d share with you….

Rome is a very strange place; it has more graffiti than I’ve ever seen in any city in the World, it has potholes that you could bury a badger in and it is extremely dirty, in many places there were bags of rubbish piled up in the streets. However, you can walk along narrow, cobbled streets (do not wear heels here ladies!), with their tiny boutiques full of Italian chic and then come across something like this: 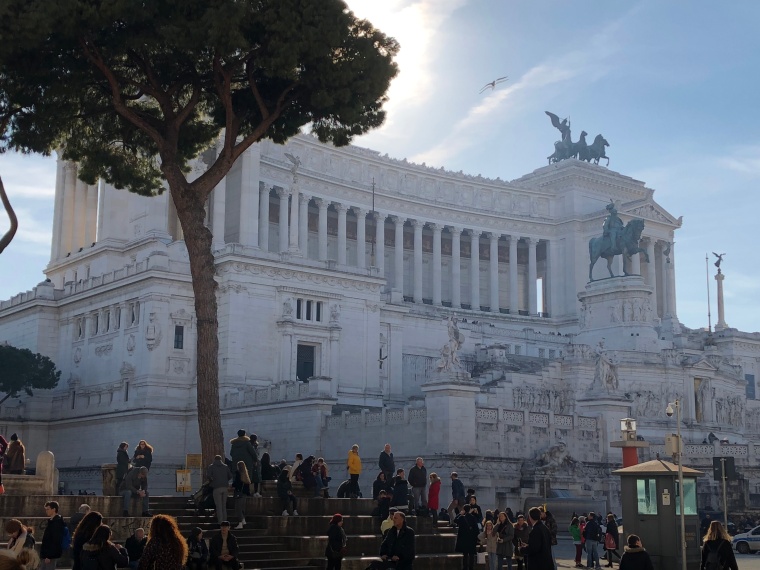 There are immense monuments to the city’s glorious past that just seem to rise up before you from nowhere. We found this one whilst on the hunt for lunch and were lucky enough to get the last remaining table in a restaurant just opposite; what made it even better was that the sun was shining and it was warm enough to sit outside! Can you imagine looking at this whilst tucking into the most delicate mushroom risotto? Heaven! Saying that, I’d chosen the risotto as my stomach was in revolt after 2 or 3 days of eating nothing but pizza and pasta; it says something about a culture when the ‘light’ option is risotto!

What many people don’t realise about Rome is that, just outside the city there are mountain ranges that, if tackled, offer the most beautiful views and one of the best ways to get to them is on a motorbike, so that’s what we did. Glorious bend after glorious blend led us through tiny villages and beautiful countryside that seemed to subtly change with every kilometre. 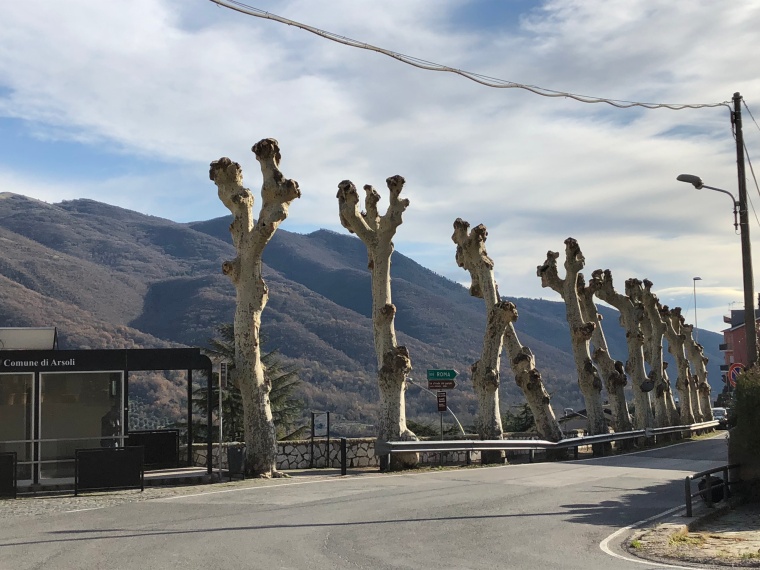 After 100km or so we finally stopped for lunch in a grotty looking cafe that served wonderful food (I was told that any restaurant in or around Rome that doesn’t serve great food will close down within a month or so!). We chatted about the ride up there as bikers are prone to do, enjoyed our lunch and some coffee that was like rocket fuel and  eventually wandered outside for the journey back. At some point the weather had decided that it would stop being warm and sunny and, instead, would give us some cloud cover and drop the temperature by 8 degrees or so; it was absolutely bloody freezing! The guys decided that the route back through the mountains could potentially result in the loss of extremities so we took the motorway instead…..4 very experienced bikers, full of coffee and with a straight road ahead of them meant that we hit speeds of 240 kmph but at least we got back to the warmth of our friends’ house in double quick time!

I should point out that this trip into the mountains was taken on New Year’s Eve and 5 hours on the back of a powerful bike, travelling at high speed through twisty, winding roads is not exactly what you’d call relaxing. Once home, there was time for a quick change of clothes before it was off to the supermarket to stock up on booze for the evening’s festivities and then shower, slap on some make-up, party dress and I was good to go! I started to feel a bit weary around 11pm but all thoughts of sleep were drowned out by party music and the noise of 15, over-excited Italians all talking at once (how anyone actually follows the conversation is beyond me!)

Close to midnight I was looking longingly up the stairs and was, mentally, already in my PJ’s and tucked up in bed with my kindle but then the countdown began and everyone rushed outside; curious, I followed. The view from my friends’ house is, well, Rome…pretty much all of it and it was ablaze! There was an absolute sea of fireworks as far as the eye could see and the noise was unbelievable! Lights in every colour, flashes, speeding rockets, spinning fire, raining droplets and the sound of 10,000 drums, it was one of the most amazing things I’ve ever seen! Sadly I was too busy enjoying it to take any picture – sorry about that! The excitement of that kept me going until 01.30 but then I took myself of to bed – the last of the revelers crashed at around 5am but were up the next day at 10am to prepare lunch for 20 guests!

New Year’s Day involved lots of eating and people yawning but the next day dawned bright but freezing cold so my best friend Will and I and his cousin Manuel (our host) wrapped up warm and set off for Frascati. From there we went to Castel Gandolfo, this beautiful old village is on the edge of a huge lake and is home to the summer residence of the Pope; lucky guy, the views are amazing: 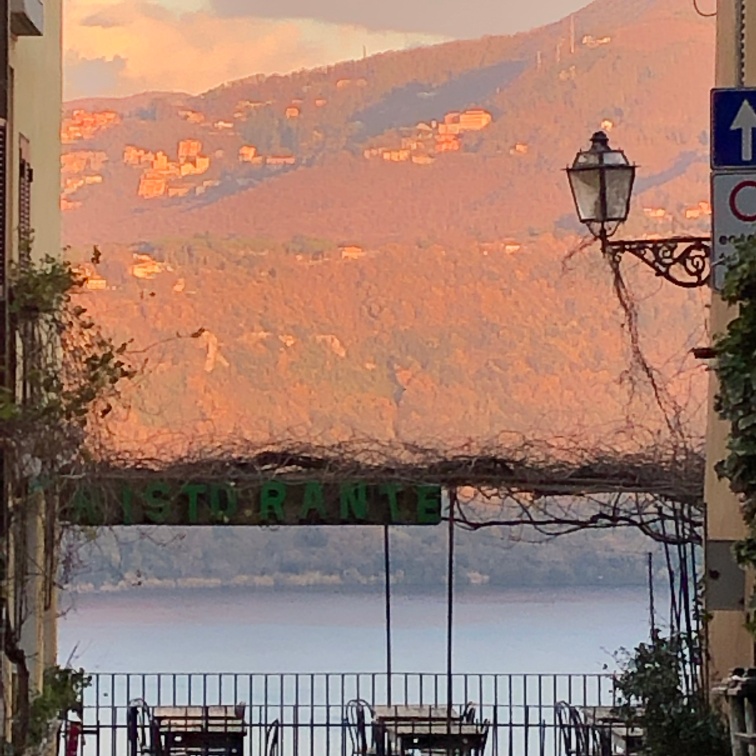 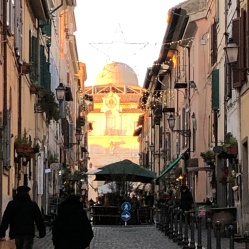 We drank cappuccino outside while watching the world go by, we ate Porchetta in pizza bread, we wandered through market stalls and smelled all the delicious aromas they had to offer and marveled at the beauty of the landscape before agreeing that we were all cold and tired and it was time to go home. As we circled the lake to pick up the road back to Rome the sun began to set and, despite the temperature and our heavy eyes, we had to stop and just watch…… 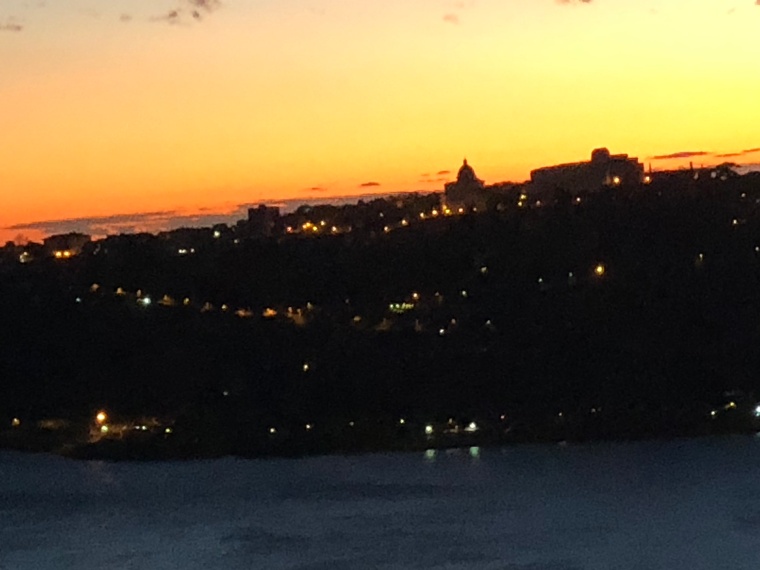 I cried a little on Christmas Day because I wasn’t with the man that I loved, I cried again on New Year’s Eve for the same reason BUT in between those times I was with friends, people who care about me and want me to be happy. I was welcomed into an Italian home by people who are hospitable, charming, generous and unfailingly kind. I was hugged and kissed by everyone who crossed the threshold and I even learned to speak a little Italian with their patient coaching. Before leaving, I had wondered if I would be better off spending Christmas and New Year alone; I’m very glad that I decided to spend it with these wonderful people instead! Oh and I mustn’t forget Stella, our host’s beautiful dog who let me hug her when I felt sad and made me laugh by doing a 4 wheel drift on the kitchen tiles when she was racing to get her dinner. We went for several long walks with Stella and I was reminded of what it is to be joyful; I want to be as free and as happy as that little dog and, over the last 2 weeks, I came close ;O)

PS. If you ever fancy a trip to Rome my friend Manuel has a super little B&B for rent just yards away from the Colosseum ;O)