Have you ever done something undeniably dumb but then couldn’t stop giggling about it afterwards? You know you should probably be embarrassed but you just can’t help but see the funny side? I think of it as brain fog; one minute your thoughts are progressing through your brain in a perfectly orderly fashion then the fog descends and they start stumbling around and bumping into things……. 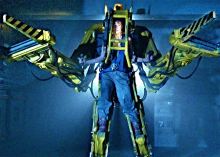 I had a moment like that yesterday. I was in the gym with my best friend and we’d just finished using a piece of equipment which works out pecs on one side and biceps on the other (it looks a bit like the machine that Sigourney Weaver climbed into in the film Aliens). Anyhoo, when you’re done with said machine you have to take off the weights and put them back where you found them; feeling in an uncommonly helpful mood I decided to take on that task myself.

Now, in my defense, the rack where the weights are stored is right next to the bench press machine; the significance of this will become clear….

“What are you doing”? My best friend asked

“Putting the weights back”

“They don’t go there”

I should explain that my friend is one of those who believes the old adage ‘a place for everything and everything in it’s place’ whereas I’m more of a ‘there’s a place and it fits’ (I apply the same logic to crosswords).

I was mildly miffed that he was telling me off for not putting things back in exactly the right place when he could, in fact, be helping. I calmly carried on replacing the weights with a martyred sigh.

“It’s not that” he said, grinning “You’ve just added 7.5kg to the bar on the bench press machine”

“What?” Brain fog still swirling but beginning to dissipate….

He pointed to an extremely bemused Frenchman who was obviously trying to figure out why the airhead English bird was adding weights to the machine he was using rather than putting them back on the rack where they belong.

“Oh merde!” the sound of a penny dropping (in French)

Once I’d stop giggling at my own stupidity, I apologised profusely to the poor man who took it rather well considering. Mind you I couldn’t help but wonder why he didn’t say anything instead of calmly watching me do it…….

Have you ever had a complete airhead moment or has brain fog ever descended at an inappropriate moment? Let me know, I’d love to hear from you

← Feeling Proud?
Fighting Amongst Yourself →