Has anyone ever said those unfortunate words to you? Did you have to suppress the desire to grab their breadstick from their hands and shove it forcibly up their nose? Well maybe not a breadstick (not sure where that came from at 9am) but you get the picture. It has to be one of the most irritating things that we can say, one human to another, especially when the phrase is accompanied by the tiny, patronising smile which says “I knew you were an idiot”. This raises two important questions: 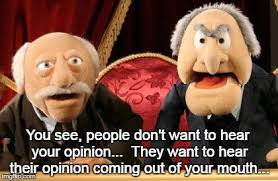 Well, we never like to be wrong and we all like to give other people the benefit of our experience don’t we? That means that, when someone takes our advice, they are reaffirming our belief that we are right and we feel both useful and proud – all good stuff! Unfortunately, when we offer someone, what we think is, the first step on the road to enlightenment and they ignore us it’s a real kick in the crotch for our self-esteem. It tells us, simultaneously, that our experiences, which are so significant to us, have no value and that we don’t know what we’re talking about.

Therefore, when we impart our wisdom to someone who obviously has no care for it we are inclined to take no small pleasure in waving our finger in their face and manically yelling ‘Ah Ha!! I told you so’ when we are finally proved right. To give us our due many of us will realise shortly afterwards that we were a bit of a dick and go and say sorry but, in that moment, we take massive delight in seeing the other person proved WRONG…….

…….and this is why people want to assault us with breadsticks!

So, why didn’t we just take the good advice? We knew it was good, we knew that the person giving it to us was right in what they were saying and that they had been in a similar situation. Well, basically, if we’re honest, we like to think that we know best and we don’t like being wrong……..sound familiar? 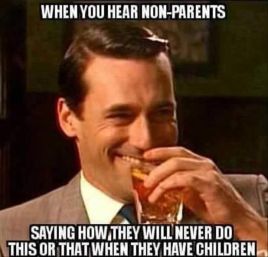 However, it’s also true that we can only really relate to things that are within our own experiences so, sometimes, that’s why we take another path when someone tells us what we should do. For example, a first time pregnant woman will be inundated with advice on how best to raise her baby in the first few months of its life. Now she will be dealing with all the pregnancy stuff, determinedly not thinking about the birth itself, and trying to get herself mentally and emotionally prepared for a life-changing event. She will most definitely NOT want to hear about little Johnny , how he got 14 mini marshmallows stuck up his nose at the age of 16 months and how said event was prevented in future years…….right up until the point where she’s trying to fish marshmallows from the nasal cavity of her offspring.

At this point she’s on the verge of tears and  thinking ‘Oh shit, why didn’t I listen!’ and someone, somewhere is doing the ‘I told you so’ dance. There is no doubt, at some point, the new mother will be passing on this valuable marshmallow/nasal related wisdom to another pregnant friend who will also not like being told what to do and will have no reference point for the event and so the cycle will begin again.

So, what should we do? Never share our own experiences? No, of course not! Just don’t get pissed off if someone isn’t enlightened by what you tell them and never say ‘I told you so’ especially if you are in an Italian Restaurant………Of course, that’s just my advice :O)

What about you guys? Have you ever regretted not taking someone’s advice or regretted saying I told you so (breadstick related injuries aside)?

← Song Lyric Sunday
I Wish You Were Here…. →