It was just 2 years ago that you finally finished your first novel, you know the one that left blood, sweat and tears on your keyboard, the one that consumed your every waking moment and took you away from your friends and family as you poured your heart and soul into it. Do you remember how it just took off? The money that came rolling in afterwards? The second novel that just seemed to flow from your fingertips? The adulation, the reviews, the interviews and now they’re making a film from your book; does life really get any better than this?

Did you ever imagine that JK Rowling would take the time to send you a message of congratulations? And what about meeting Christian Bale; to think he’s considering playing your book’s lead male character! How did you even manage to form a coherent sentence when you talked with Jennifer Aniston about taking the female lead? Honestly, these last two years have just been a complete whirlwind and now you’ve got everything you’ve ever dreamed of……

Of course, you don’t really see some of your friends now, not after that fiasco of a party! It still makes you angry just thinking about it, doesn’t it? You knew them when you had nothing and now you’ve made it all they can do is make snide comments about how you’ve ‘got a bit above yourself mate’. All you were trying to do was give them a good time and show them round your new place in the country, what’s wrong with that? Yes they’re used to a pint down the local but when you’re celebrating you do it with champagne, everyone knows that don’t they?

What was it Gary said?

‘Why the f**k do you need 8 bedrooms mate? Planning on taking in a few lodgers are we? Well, you can put my name down, I could get used to living like a toff!’

You can still hear them laughing can’t you? Mocking everything that you’ve worked so hard for. No, of course you don’t need 8 bedrooms, there’s only you, Maureen and the kids but why shouldn’t you have a nice house? Why are they so bloody jealous? It was the same with the car; how many times had you and Steve talked about the day when you’d win the lottery and turn up at the pub in an Aston Martin; shaken not stirred Miss MoneyPenny! Jim behind the bar didn’t think it was funny but you and Steve just cracked up……what did he say when you showed him the new Aston?

‘Christ! Amazing car man but, well, where are the kids gonna sit?’

Then of course you had to explain that you’d bought a Range Rover for Maureen and the kids to use and after that Steve just went a bit quiet He said that he was really chuffed for you but you could see the tightness around his mouth and something in his eyes that you couldn’t quite put your finger on. You never did get to really show him round the car did you? You’d had it all planned out as well, the two of you turning up at the pub and ordering your Martini’s from the long suffering Jim but it just didn’t feel right after that…

It’s not like your friends haven’t benefited is it? Do you remember that time that you took them all out for dinner at that posh French restaurant? You were so proud of Maureen that night, you’d never been able to afford to buy her anything really nice and, yes, that dress may have been a bit glam but the woman in Harrods said it was a really top brand. Why did the other wives have to take the piss behind her back? All those comments about mutton dressed as lamb? You were sure that she heard because she went really quiet after the main course but she never said anything…..£3000 for dinner and all you got were bitchy comments and jokes about the size of the portions:

‘I think I might need to pick up a kebab on the way home, did you see the size of those portions?’ 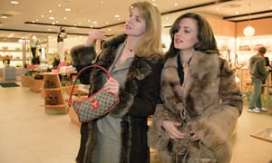 I think it was after that that you met Giles and Veronica wasn’t it? They seemed nice enough but their friends were a bit much; all that talk about ‘wine pairings’ and ‘haute cuisine’, what’s all that about? You’d really hoped that Maureen would make some new friends but she said that she felt ‘out of place’. They did take her shopping that one time but she said that she’d remembered when she’d had to save up for that coat in M&S and she just couldn’t bring herself to pay £300 for a t-shirt and she came home with nothing. Apparently they’d all been given champagne in the shop and all the other women said that she looked ‘simply marvelous’ in the t-shirt but didn’t you think she looked a bit sad when she was telling you about her day?

It probably hasn’t helped that she doesn’t do so much with the kids these days; they’ve really taken to this new life haven’t they? Didn’t Mark say that he was off skiing next week and Sarah seems to spend all her time shopping; it’s funny but they’ve even started talking differently; have you noticed?

All that stuff on Twitter upset her as well didn’t it. What was it they said about the big new star being stuck with a heifer, let’s be honest, that’s got to hurt hasn’t it? She did well to lose all that weight though didn’t she and that botox stuff certainly makes a difference. I don’t really see why she wasn’t happier about it, I mean, yes she was then little Miss Plastic on Twitter but, well, that’s Twitter isn’t it, I don’t know why she got so upset about it all…

Perhaps a nice holiday would help cheer Maureen up? Oh yes, that’s a great idea! Do you remember when you and the gang used to go to Ibiza for a week every summer, it was such a crack! Mind you, after those 2 weeks in the Maldives in March…..flying first class, 5 star hotel, your own personal butler; how are you going to top that? If you think about it that hotel in Ibiza was a bit grotty wasn’t it? No, Maureen deserves better than that doesn’t she; why don’t you pick up a brochure for the Caribbean?

That’s the idea, just finish this chapter (your face was a picture when you saw the size of the advance for book 3), have a cup of tea with Maureen and then the two of you can pop down to the travel agents. That should cheer her up a bit shouldn’t it; she’s really seemed a bit down just lately……..

Oh God, I don’t know what to say. When did you find the note did you say? That morning when you were planning the holiday? How could she go off with Steve? After the way he treated you!? You gave that woman everything and she’s run off with a bloody plumber!

Look, I know it’s tough, Maureen’s gone and you only get to see the kids once a week but look at what you’ve got! That third book has just hit the stratosphere, you’ve already sold the film rights what more do you want, you’ve got everything you’ve ever dreamed of and that girl you had on your arm last night, hubba hubba!!! What do you mean you’ve got nothing in common with her? Well yes you’re old enough to be her father but so what, she’s an absolute babe and, if it doesn’t work out with her, there are hundreds more who’d be happy to take her place.

Can’t you see, you’ve made it!

← A letter from the other side.
Only The Best? →

7 comments for “The Price of Success”